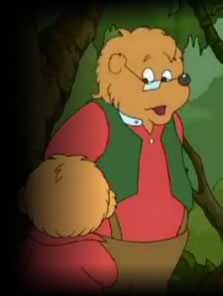 The Lakota Berenstain Bears Project is a joint venture of the Standing Rock Sioux Tribe and the Lakota Language Consortium, with the goal of bringing the Lakota language to family television sets across all Lakota-speaking communities in North and South Dakota, and well beyond.

Produced and distributed with the permission of Berenstain Enterprises, Inc., Nelvana Limited and PBS (Public Broadcasting System), this 20-episode Lakota language edition of the Berenstain Bears is a first of its kind - the first Native American language cartoon series EVER.

Voices of the characters are all from the Lakota-speaking Standing Rock, Cheyenne River, Pine Ridge, and Rosebud communities of North and South Dakota, and reflect all local dialects of the language.

Equally as important, the original Berenstain Bears series lines up very well to Lakota values, which was very important in the making of this series. Lakota values such as bravery, respect, generosity, and fortitude all play significant roles throughout the 20-episode series. Lots of different family interactions reflecting day-to-day life, as well as many idiomatic expressions help keep the langauge use real and relevant in every episode.

The "Matȟó Waúŋšila Thiwáhe" television series will begin airing on North and South Dakota Public Broadcasting stations starting in September of 2011. The individual episodes will be posted on this companion website in the order that they appear on television. For a full schedule of episodes, click here.


All 20 episodes will be available on a limited edition DVD, complete with a 12-page episode guide for teachers, parents, and students alike - available in late Fall 2011.

We hope you enjoy this cartoon series and find it helpful in keeping the Lakota language alive in your household and community. It is such a crucial cultural treasure that should never be lost due to lack of use.